The Maximum Occupancy sign is designed to inform guests of the maximum number of people allowed on one location / room. The sign maximum occupancy is calculated based on few concepts:

Terms You Should Know related to the maximum occupancy signage:

Assembly Occupancy- According to the National Fire Protection Association (NFPA), an assembly occupancy refers to “an occupancy (1) used for a gathering of 50 or more persons (2) used as a special amusement building

What Are Maximum Occupancy Load Signs? An occupancy load must be posted on signs, which are sometimes called maximum occupancy load signs, so that this information is publicly available.

Where should be the occupancy sign installed? The 2018 International Building Code (IBC) requires that certain signs should be present in all “assembly occupancies”. Many states, cities and municipalities require owners to comply with the law and install occupancy signs in establishments such as restaurants, bars, coffee shops, night clubs, casinos, class rooms, gyms, exam rooms, event locations of different types, venues for wedding events, and many more….
Who is responsible for the occupancy signage at your location ? It is the responsibility of the owners to make sure that the sign is not damaged by wear or abuse and follow all state city and fire department rules and regulations.

Is the sign clear and legible? Signs should be clear and strong contrast between background and lettering.

In summary, the occupancy must be posted in many buildings on signs that are clearly visible and legible.

Our Shipping is fixed whether you buy 1 item or 20 items (We ship within USA only) - do not miss this opportunity to buy all signs needed at no additional shipping cost.

We are required to collect sales tax on any product sold on this site and shipped to an address in New York. The sales tax is 8.875 percent.

The requirements for sign content are determined by intended use and by applicable regulation. The BUYER is responsible for determining the appropriate content for a sign or package of signs. Firedepartmentsigns.nyc makes no warranty or representation of suitability of a sign for any specific application. IT IS THE CUSTOMER'S RESPONSIBILITY TO ENSURE THAT THE SIGNS THE CUSTOMER ORDERS ARE IN COMPLIANCE WITH ALL STATE, FEDERAL, LOCAL, AND MUNICIPAL LAWS. Please review terms and conditions prior to purchase.

For more information about what is required, see the laws that are referenced and the rules applicable to your city and state. This page is for informational purposes only and is not intended as legal advice, professional advice or a statement of law. You may wish to consult with an attorney. 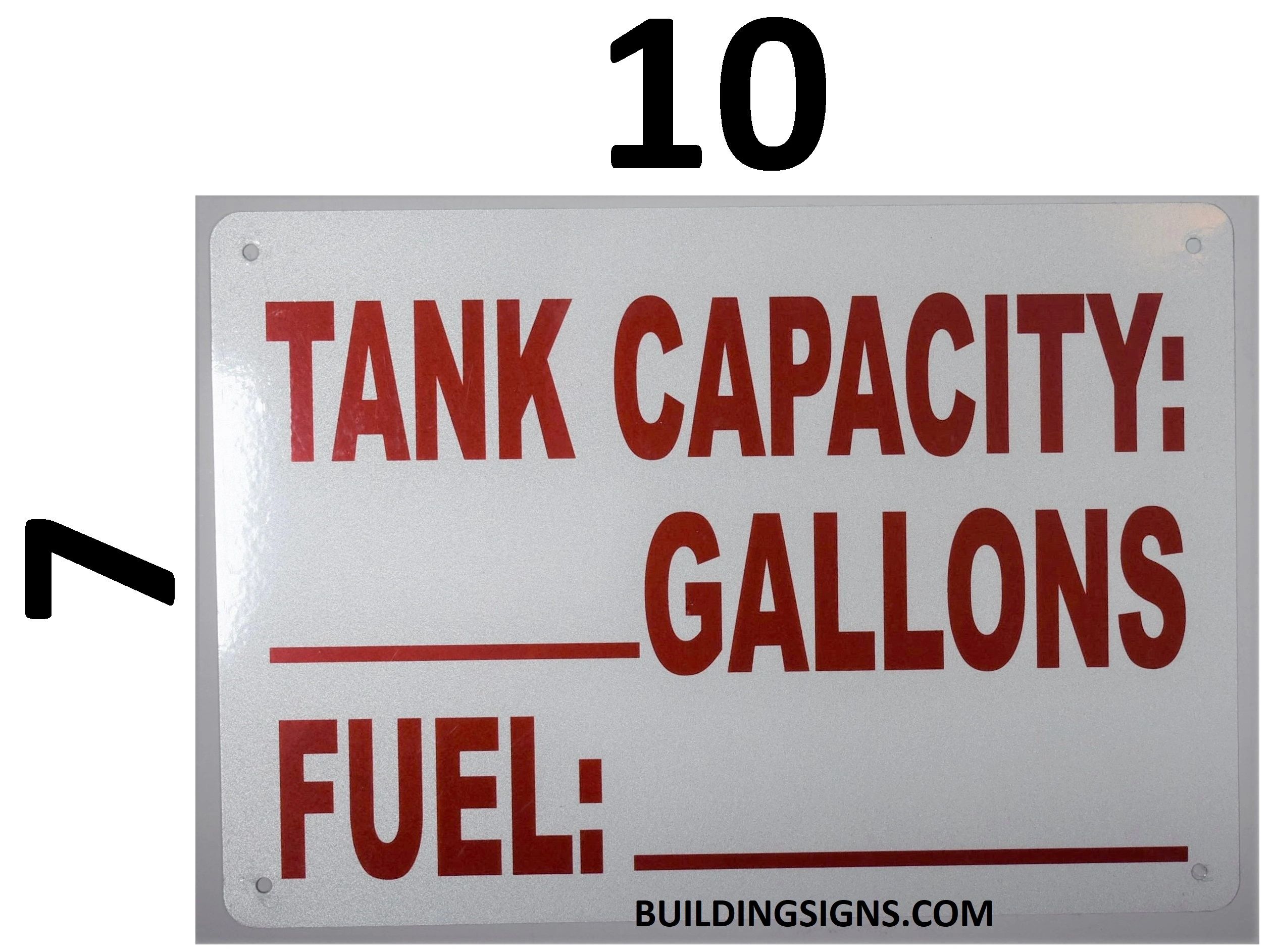 This is an aluminum “TANK CAPACITY_GALLONS FUEL:_” SIGN with holes for HEAVY DUTY installation. In NYC use/post sign to inform tenants/owners/customers/guests/residents/officers of fuel and maximum capacity of tank in facility with proper HPD designation and aluminum signs